This is the surprise recipe success of the year: a feather-light  chocolate mousse without an egg white in sight. I’d been meaning to try chick pea water  for ages but wasn’t convinced it would work as a substitute for egg white. But it does. It whips up into a fluffy cloud of air to make the lightest, bubbliest mousse ever.  This recipe uses the liquid from one tin of chick peas, otherwise known as aquafaba, to make four small ramekins of mousse. You’ll need a stand mixer with a balloon whisk as it takes a lot of beating on a high speed setting. 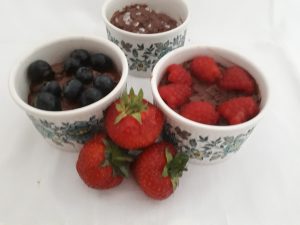 The lightest mousse you’ll ever taste

Aquafaba drained from a tin of chick peas (about 130ml)

Meanwhile, tip the aquafaba and cider vinegar into the mixer bowl. Attach a balloon whisk and beat the aquafaba on a high setting until you have a stiff white mixture that resembles meringue. This can take ten minutes or more.

Tip the cooled chocolate into the bowl and carefully fold  it into the meringue with a metal tablespoon. Next, fold in the cacoa powder.  You’ll have a silky, velvety mixture ready to spoon into serving dishes. I served it in my vintage Royal Worcester ramekins (see the picture above). The mousse would also look attractive in  china teacups or glass tumblers.

Use those chick peas in my spiced chick pea curry recipe!

Fruit crumble with an oaty topping

Ritatouille- my version of a classic French summer stew